Barbara also contributed to the community as a member of the Steering Group for the (GCIF) Galway City Intercultural Forum where she had the unique opportunity to influence the policy making process regarding ethnic minorities and cross – cultural communication  between all the city stakeholders.

GCIF was a formal platform for intercultural dialogue between local communities, seeking to increase the participation of ethnic minorities, in the development of Galway city. The Intercultural Forum has become the focal point of contact to reach ethnic minorities in Galway city and recognised as the “collective voice” of the intercultural community. GCIF held consultations and focus groups for public and private sectors organisations for implementing sectorial intercultural strategy and issued recommendations on key policy issues. GCIF were partners to developing Galway City Intercultural Strategy ‘A City of Equals’

On the 21st July 2010 during a meeting with Minister of State for Equality, Integration and Human Rights, Mary White, T.D. in the Galway city hall, Barbara was delighted to present the role and work of the Forum.

Galway City Intercultural Forum’s Policy Document ’’Making a Difference’’, was launched by the President Michael D. Higgins on 21 May 2011. 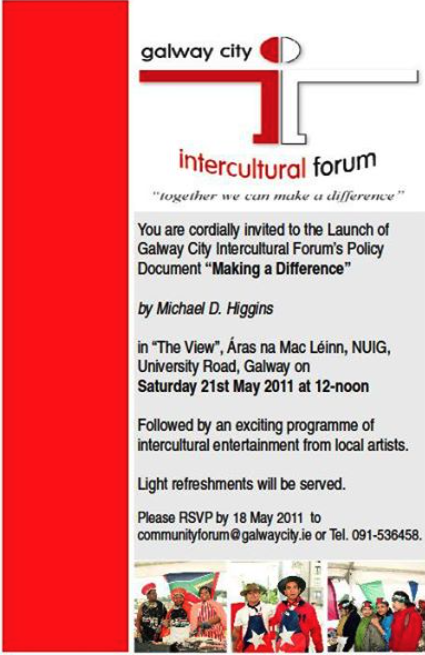