As a Chairperson of the Galway Irish Polish Association (GIPA), Barbara successfully run various projects and they have now become an integral part of Galway history.

The Galway Irish Polish Association was established in May 2007. The Association was registered with the Galway Community Forum in August 2007 and was part of the local government project called the Intercultural Forum. The Association played a leading role in the Intercultural Forum, an initiative supported by the Community Forum and Galway City Partnership, which sought to raise awareness of and promote the integration of new communities in the city. 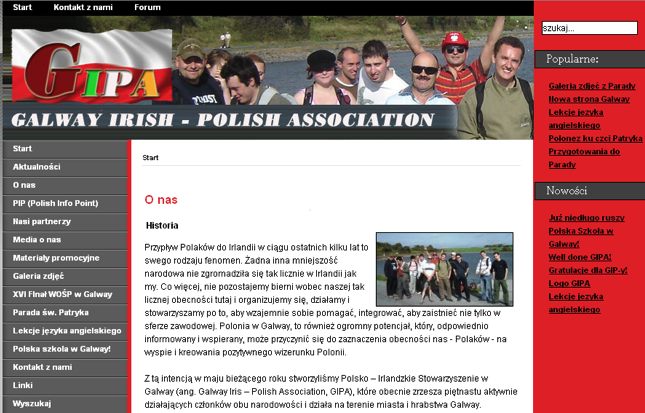 In 2008, GIPA was nominated for The Ethnic Entrepreneur of the Year Awards.

One of the GIPA’s main aims, was to integrate Polish and Irish communities in Galway through cultural education and exchanges; to provide information about everyday life in Ireland, as well as the local law and regulations, in a broad sense and to promote Polish traditions and culture.

GIPA was the only Polish society in the Galway region. Its activity was project based. GIPA has run several projects such as: Social and Legal Advice Clinic, participated in 1st Galway Intercultural Festival & Barbeque, Polish-Irish cultural nights in local pubs , Polish Business Network – a network of Polish businesses in Ireland, organised English classes for Poles, The Great Orchestra of Christmas Charity and many other events. Thanks to the Association, Poles in April 2008, for the first time took part in the St. Patrick Parade in Galway.

The Galway Irish Association has hugely contributed to Polish-Irish integration and will remain an integral part of Galway history and in the memory of the Polish people of Galway. For several years GIPA actively represented Polish interests in the county and the district. It has been mentioned many times in local media and national television.

We would like to thank everyone involved in GIPA’s activities for their work and effort.